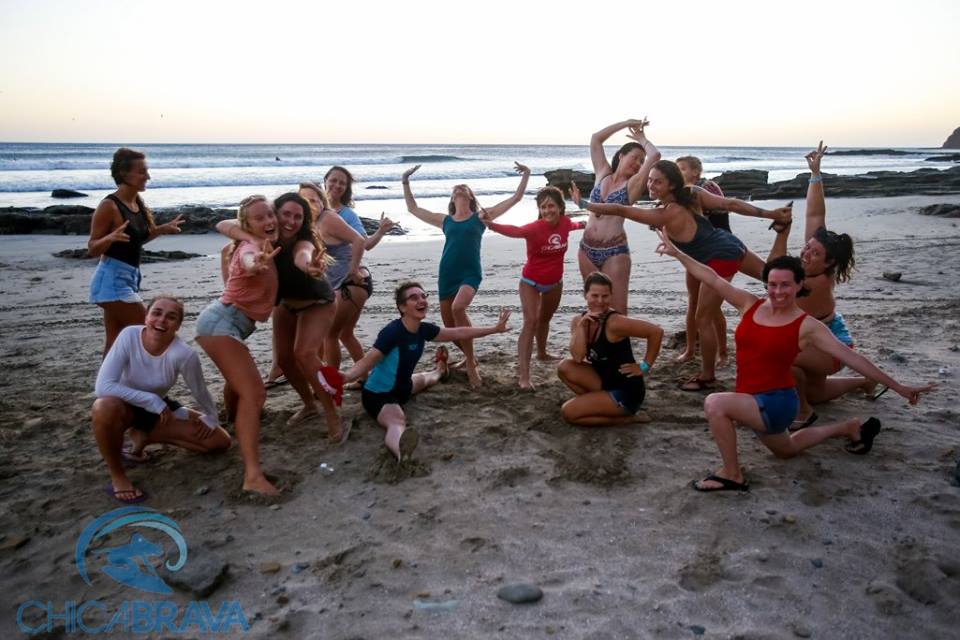 Up the hill at Cloud Farm, just outside of San Juan Del Sur, we met eight women who came to Nicaragua for an empowering week of surfing, relaxation, and so much growth with Chica Brava surf camp. There were a few returning women to this week’s group, one returning for her third time! The energy of the group was buzzing with excited and a little bit of curiosity for what the week would hold.

The week was started off with a delicious breakfast to satisfy the soul and a round of coffee to awaken the senses. Our surfers were ready for their first day of mastering the pop up technique taught by our head surf instructor, Marie-Sol, and did an excellent job of maneuvering their boards through the strong winds at Hermosa Beach. 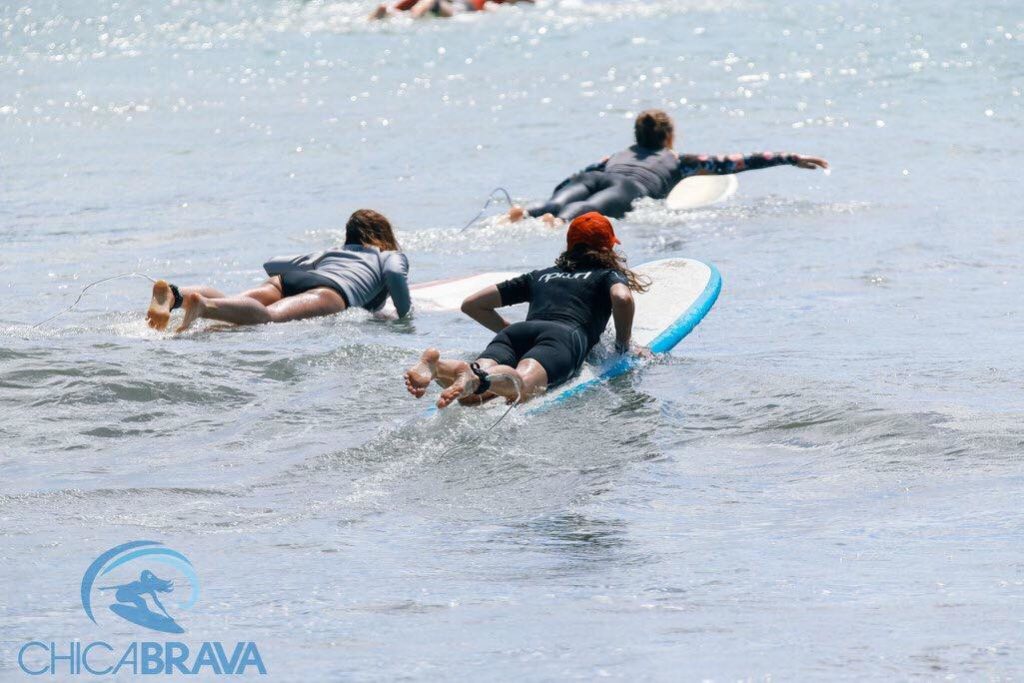 After a full day of surf and sun it was time for our surfers in training to return to Cloud Farm where a lobster dinner was waiting for them. We soon learned the reason for the feast, it was two of the Tara’s and Larissa’s birthday, and a celebration soon commenced. Annie and Savannah, two members of the Chica Brava team, surprised the group with a delicious cake hand made for the pair that day. While eating the cake, the group shared their renditions of a birthday song for the pair, in multiple languages I might add. The celebrations were just beginning however, as Savannah pulls out the biggest surprise, a cat shaped piñata! After the first couple swings our birthday girls take a leg off the poor papermache cat, candy flying everywhere. The rest of the night was a mixture of Tona’s and lollipops for a nightcap.

The week ensued with medium to small size waves as the swell started to drop and mellow out. The group enjoyed one more day at Hermosa before returning to Casa Bella for some sunset yoga and a relaxing evening listening to the nature all around. 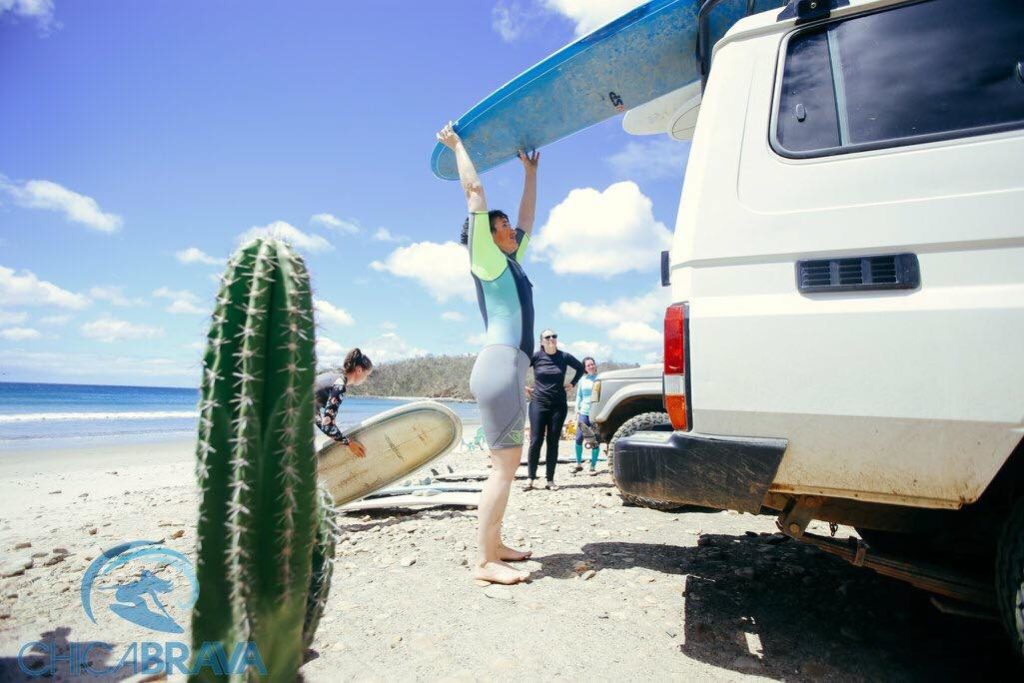 The group of Chica Brava surfers ventured to El Remanso the next day and were treated to knee high waves as the group practiced dropping into green waves and paddling to the outside with a few turtle rolls here and there. It was a record wind speed of 43 mph but that didn’t deter our group as they held their boards strong and paddled hard into the oncoming waves.

As the swell continued to drop the next few days, the women used this time in the water to get playful and build their confidence by catching their own waves and cheering each other on in the lineup. 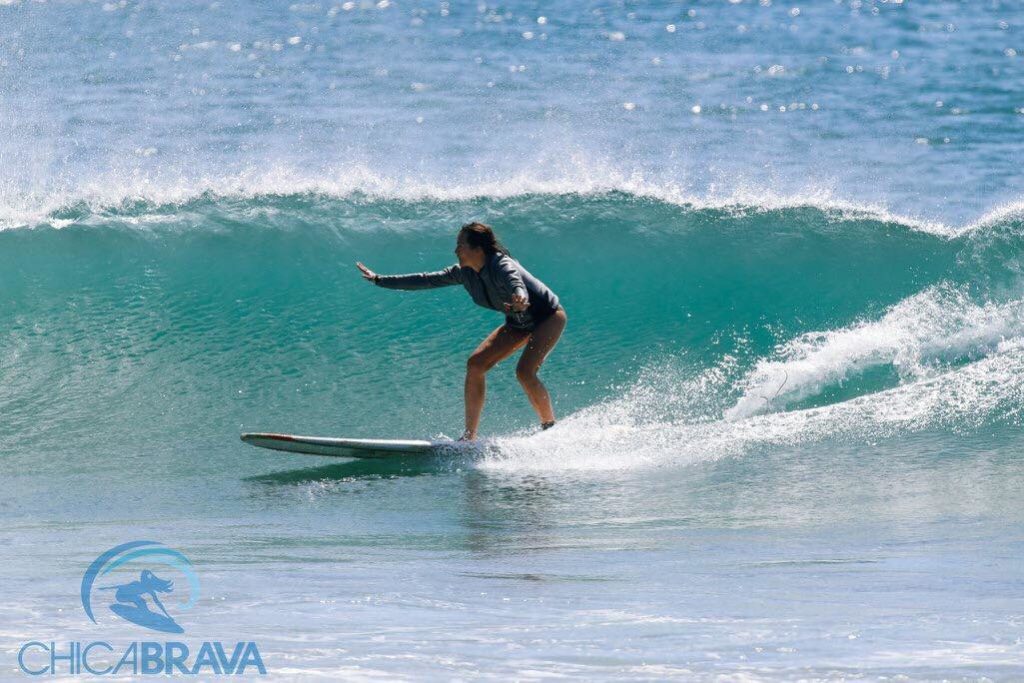 By popular demand, a paint night was set up with the Art Warehouse were the women were asked to portray a wave. It was excellent to see all the creativity and different take on that piece of nature we respect and love so much.

The week was ended off at Playa Maderas where we were pleasantly surprised with a little rise in the swell and treated to knee to chest high waves to ride. The water was a little brisk but was so clear that we could watch the beautiful manta rays swimming below the boards.

The surf session was followed by a beautiful sunset paired with ice cold beers to wash the salt water down before enjoying a seafood feast with live music and tones of dancing on the dance floor of El Timon, as well as sporadic beach dance parties. We enjoyed having the group of women immensely and loved watching them progress in every area of surfing and their own personal journeys with Chica Brava.